Share on FacebookShare on Twitter
A pregnant thirteen years old has claimed that a 10-year-old boy is the father to her unborn baby, says the pair fell in love at first sight.Daria, 13, and Ivan, 10, have appeared on a television talk show in Russia ahead of their baby’s arrival to share details of their relationship, the Mirror UK reports.
According to the children they met each other a year ago and fell in love at first sight.

Daria, who is just eight weeks pregnant, said during the On Air show, which they appeared on with parental permission:

“A friend of mine introduced us and two days later we started dating.

“Ivan said he was in love with me. We tried to spend as much time together as we could. We like walking down the streets holding hands and kissing.”

But there are some questioning whether the 10-year-old boy could have fathered a baby at all. A local paediatrician Nikolai Skorobogatov said “theoretically both children could have reached reproductive age.”

But Dr Evgeny Grekov, a urology and andrology expert, says Ivan could not be the father.

“We rechecked the laboratory results three times so there cannot be any mistake. There cannot be sperm cells. He is still a child.

“There is even no testosterone. And just to add, he still has childish sex organs. Puberty has not started. So we have a lot of questions.”

According to the girl, who is planning on keeping the child, she and her boyfriend take care of each other and set their social media as ‘married’. 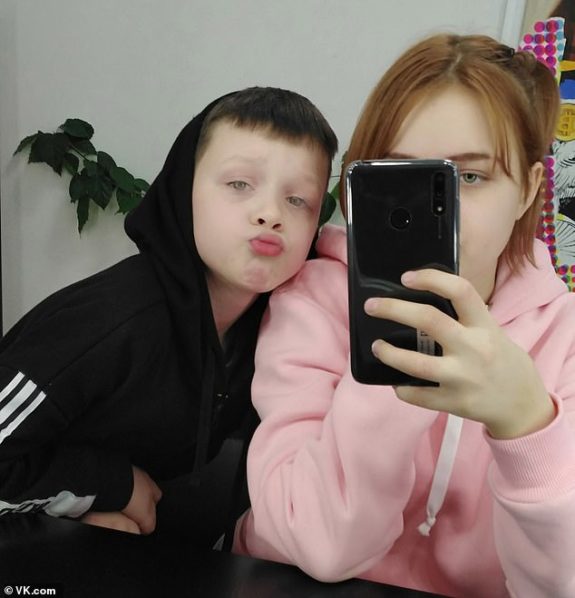 “Ivan has gastritis and I do not allow him to drink carbonated beverages. Sometimes I worry about my weight but he says that I am in perfect shape and do not need to go on a diet. He is very kind.”

Daria revealed that she and Ivan had sex at his home when his mother was away.

“After we did it for the first time, we hid from each other under the blanket out of shame.”

Soon after Daria started to feel sick and had nausea most days.

The girl’s mother Elena took her to hospital for examinations but doctors failed to find the cause of her ‘illness’. Finally, Elena bought a pregnancy test kit for her daughter. Elena, who was also participating in the show, said:

“The test showed that Daria was pregnant. After that, she confessed to having sex with Ivan.

“I was in shock. I could not say a word. When we started talking she said she would not kill the baby and I support her decision. I do not want her to go under the knife.”

Ivan and his mother Galina, 28, are planning to help Daria to raise the child.

“I did not know what to say after learning that my 10-year-old son fathered a child. I think Ivan himself does not quite understand what happened. He said they came to our apartment and Daria offered him to have sex.

“They did not use any contraceptives and obviously did not realise the possible consequences.”

Some of the families’ neighbours express doubts over whether the boy is indeed the father.

READ ALSO  Riot in Spain AS Coronavirus Kill 849 People iN One Day.

A man living next door said:

“I think somebody else got the girl pregnant and now they want to put all the responsibility on the boy.”

And a woman said:

“I do not believe the boy is the father of the child. I doubt he is developed enough for that.”

“Daria has never been with another man. I know that for sure. I am the father of her baby.”

The children say they became a target for bullying in their hometown of Zheleznogorsk in central Russia’s Krasnoyarsk Krai region.

‘”Some children from my school called me a w***e and said that I am sleeping around. I wanted to die after hearing that.”

“People are mean and their opinions are often cruel. Once Ivan came home and said, ‘Where could I hang myself?’ I was heartbroken.”

Daria underwent a medical examination in one of the best clinics in Moscow, according to the show.

READ ALSO  Sex With Someone From Another Household To Become Illegal: #Lockdown Rule

The police has however launched an investigation into the incident.

“All the people involved and the girl’s school are being interviewed.”

Meanwhile, Daria may be pregnant at 13 however she can’t hold the candle to Lina Medina, a Peruvian who is the youngest confimed mother in history. Lina gave birth birth when she was just five years, seven months, and 21 days old.

He stabbed his girlfriend to death over telephonic argument