A 6-month-old baby accused of having collected €500 of excess rent was summoned to a Brussels court.

The baby was summoned by the justice of the peace in the Brussels municipality of Molenbeek-Saint-Jean. The baby girl was accused of having collected €500 of excess rent, and refusing to reimburse €660 of rental guarantee on a property that was rented via the Public Centre for Social Action (CPAS).

The incident happened from January to June 2019, before the baby was even born in July.

In a Facebook post, the baby’s mother explained how she received a letter summoning her 6-month-old daughter to court, after which she called the court to point out the error.

The mother said: “A clerk confirmed that it was indeed an error, and that the situation was settled.”

However, a second letter reminding the family of the date of the hearing arrived at the end of January. When she called the court again, she was told to attend the hearing on the date indicated to prove that her daughter was a minor. 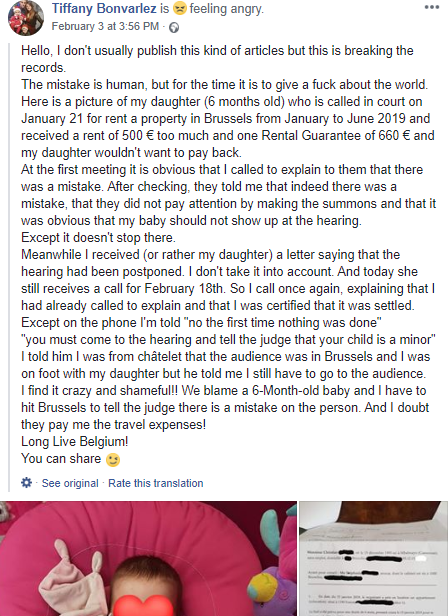 She said: “I have no means of transportation, but I would have to go to Brussels to prove that my daughter was not even born at the time the incident took place.”

However, after posting her story to social media, and contacting the court again, she received an email that the judge, as well as the defendant’s lawyers, dropped the proceedings.

“In his e-mail, the clerk confirmed that the hearing will not be necessary, as my daughter is not responsible for the situation given her age,” she said, according to RTBF.

Onyeka Onwenu wins against those who stole her song

Onyeka Onwenu wins against those who stole her song