Jürgen Klopp feels Liverpool’s Champions League last-16 tie with Atletico Madrid remains far from decided, despite a 1-0 first-leg defeat for his side in Spain on Tuesday evening.

Saul Niguez’s fourth-minute goal at Estadio Metropolitano will see the La Liga team head to Anfield with a slender advantage for the return fixture on March 11.

The Reds had 73 per cent of possession in the encounter but were ultimately unable to find a way through the spirited Atletico rearguard.

But Twitter is blanked with #KloppOut as fans call for the exit of their former Messiah.

Brunooooo @RGT_1999 says “When you realise you had a lucky 3 years and it’s all down hill from here #kloppout”. 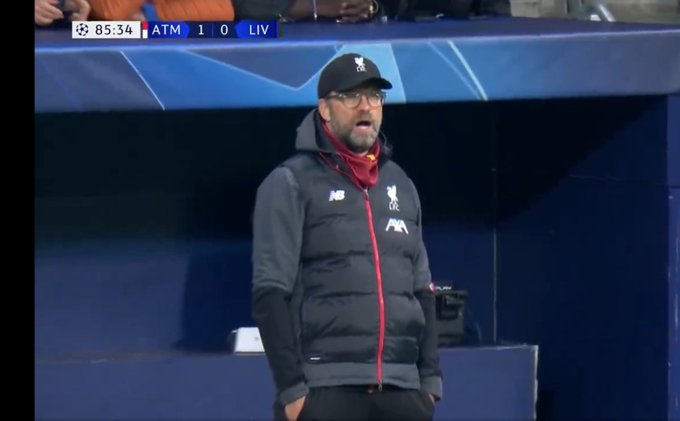 𝑲𝑫𝑩 @ftbl_GoH says “I’ve been a Liverpool fan my whole life, grew up there, all my family born there. But tonight was the last straw, I can’t take it anymore. Enough is enough. #KloppOut”
AB @mcfcAB says “I’m getting emotional even tweeting this right now. Jurgen Klopp is ruining my, no OUR club and OUR traditions. Sack him before it is too late. Enough is Enough, disgraceful performance! Emery is available! #KloppOUT”.
Allen Walker @amrfiqi555 disagrees with the bunch: “Everyone who wants klopp to leave is an idiot disgraceful ungrateful kid bich u couldn’t achieve half of what he did in the past 30 years with any other manager so FUCK OFF #KloppOut
Ellis @Ellis_YNWA says “Jurgen Klopp is finally being recognised as the biggest fraud in world football. It’s about time. #KloppOut #PochIn”
Ayo @Hakeem2real says “can’t take this guy anymore, can we send him to Arsenal or something #loyallfcfan”.
UtdHews @HewsUtd says “#KloppOut You guys deserve a better manager What about Ole?”
All Out Tottenham (Jack) @AllOutTHFC says “LISTEN IVE HAD ENOUGH OF THIS SHIT NOW, IVE BEEN SUPPORTING LIVERPOOL FOR 10 MONTHS AND IVE HAD ENOUGH! #KLOPPOUT #LFC #LFCFamily”
Mr Adristan @PogeRhian says “there’s only one thing for it. #KloppOut”
Adam Darkin @adamdarkin_07 says “Enough is enough. #KloppOut”

It’s been three years since he moved from Signal Iduna Park to Anfield and he really turned things around for the Kops.

He’s taken not only the club but also it’s loyal supporters to greater heights. Apart from their current success in the standings in the premier league, here are the five biggest achievements Klopp brought in for Liverpool.

The last time Liverpool took the UEFA Champions League trophy home was in 2005 through a fantastic turnaround in Istanbul. Fast forward to 10 years, they faced Real Madrid in the champions league final but just fell short whilst they also made it to the Europa League final back in 2016 after 15 years of absence.

These achievements were made possible with the help of a continuous worker in Klopp. The German gaffer has turned the tables around for the reds as he led them to a convincing run in the Europa League in 2016 and an unprecedented return to e champions league final last year.

#2 Unleashing the potential of Roberto Firmino

With the help of the German tactician, Roberto Firmino has found himself a lovely run of form since 2015. He’s played a total of 105 premier league matches, scored a total of 38 goals and provided 23 assists. If not for the trust given to him by Klopp, he might still wander around the bench.

In all fairness, Firmino repaid the faith given to him by Klopp by providing spectacular performances week in and week out. He’s also working hard himself to reach the level he’s in right now and even an eye injury hasn’t stopped him.

#3 Bringing Back Football To The Fans

What’s the most enjoyable way of watching a football match? For Jurgen Klopp, it has to be entertaining. Tactical in a way that the ball is working well for everyone but also flashy for the fans to enjoy the match.

You have the likes of Mo Salah, Bobby Firmino, and Sadio Mane. Do you just keep them in their position knowing that they have the skill and finesse to wriggle past the defenders? Klopp thinks otherwise.

#4 Bringing Out The Best Out of His Young Players

In the current Liverpool squad, Jurgen Klopp made the most out his young standouts. One of the most notable is Trent Alexander-Arnold. The 20-year old prodigy has already reached the highest level at a tender age and Klopp couldn’t be happier.

Along Alexander-Arnold, he still have Joe Gomez. The 18 year-old defender has played well in their draw against Manchester City where he played as a right back. Despite being in his natural position, fans do believe that he’s better off as a centre back with a partnership with Virgil Van Djik.

Since his arrival at Anfield, Jurgen Klopp has made a massive effect for Liverpool as they are now being considered as title favourites. Times to really change for the reds as three years ago before Klopp signed as the manager for Liverpool, they’re just happy to be in the top four. Now, their contention will be fulfilled if he can bring the PL trophy back in Anfield.

His record in the premier league has been impressive as well a sign of an improving Liverpool side. If they can continue with this form, they can earn a couple of silverware by the end of the season.

Now, with all these, shall we says the Reds’ fans are being unfair?

Can Yobo Lead Eagles With No Coaching Experience?