New Peugeot Landtrek Will Be Available In South Africa

by Violet Ndou
in News, Technology

Peugeot has unveiled a one ton bakkie that is expected to go on sale in SA next year to take on the likes of the Toyota Hilux and Ford Ranger.

Known as the Landtrek, the pickup is based on a Kaicheng F70 one tonner, in a collaboration with China’s Changan. The Peugeot will be built first in China and later in South America.

The Landtrek won’t be sold in Europe and is aimed at emerging markets. It will initially be launched in Latin America and sub-Saharan Africa, including SA, before being rolled out to other regions.

The Landtrek will be available in single cab, double cab and chassis cab versions, selling in workhorse and leisure derivatives. Peugeot says the bakkie will have a length of 5.33m for the double cab version and 5.39m for the single cab, all with a width of 1.92m.

Along with a payload of up to 1.2 tons and up to 3.5 ton towing capacity, the French bakkie is claimed to have the largest load box in the segment, with 1.22m between the wheel arches that’s able to load two Euro-pallets in the double cab versions. The loading area is illuminated with LEDs and has a 12-volt socket for powering accessories. 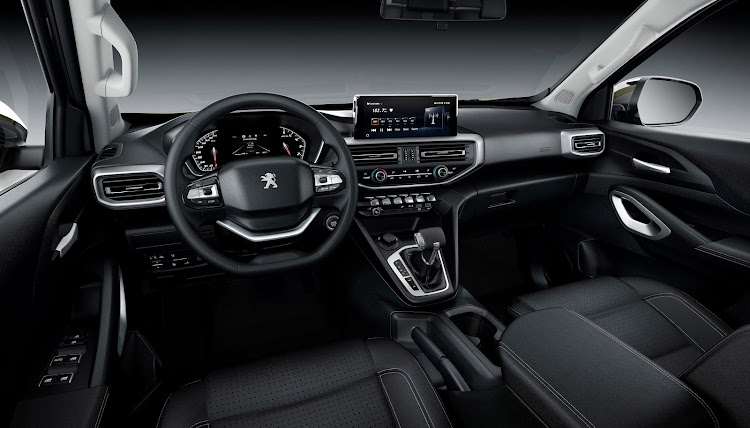 The modern interior has a two-spoke steering wheel and a high definition infotainment system.
Image: Supplied

The modularity of the rear bench seat is unique in the one ton segment, with the possibility of folding the backrest in a 60/40 split.

There will be rear-wheel drive and 4×4 versions available, with a maximum ground clearance of 235mm. The 4×4 will offer a transfer case with high and low range, and the rear differential is equipped with an automatically activating eLocker system to provide extra traction when one wheel spins.

The Landtrek has reportedly racked up two million kilometres of testing.

Styling-wise it incorporates Peugeot’s vertical grille featuring the lion in the centre and vertical LED light signatures (depending on the version).

The modern interior features a two-spoke steering wheel echoing that of the Peugeot 3008 and a high-definition infotainment system inspired by that of the brand’s flagship vehicle, the Peugeot 508.

The French bakkie is claimed to have the largest load box in the segment.
Image: Supplied

Safety is ensured by six airbags, stability control, and (in the higher versions) land departure warning.

Cameras facilitate manoeuvring both in town and on the road. An off-road camera and 360° vision support the driver when negotiating obstacles or narrow trails.

Meet The Robot That Released 100,000 Songs & The One That Closes $125million Investment Deal.

Law Student Lost 80kg in 8months & Teaching Others The Trick

Law Student Lost 80kg in 8months & Teaching Others The Trick