by Rorisang Swarts
in News, Travel

In his new photo series, South African artist Luxolo Witvoet, speaks to everyday people in Cape Town about their experiences commuting via the city’s fragile, yet vital train system.

Luxolo Witvoet is a 25-year-old multidisciplinary artist and photographer from Cape Town. In his latest series “Journey With Me,” Witvoet set out to document the stories of South Africans commuting to and from work, school, and job hunting.

While simply riding on the train might seem like a mundane, everyday act, the train holds special significance in South African history. “During apartheid, the train was the choice of transport that our forefathers & mothers used to travel long distances from one province or state to the next in search of work and a better tomorrow for their offspring—us,” says Witvoet.

His connection to the train is a personal one, directly linked to his family lineage. “My nineteen year old late grandmother travelled from her birthplace, Aliwal North to relocate to Cape Town using the train. While in Cape Town, she would eventually find work as a maid and she would meet her husband on the train en route to work,” he adds.

The train still remains the most commonly used mode of transportation according to the photographer, but the riding experience has declined significantly for many riders in recent years. This is a point that Witvoet and the 25 people he spoke to for the documentary-style series made a point of emphasizing.

“Ever since the management changed from being government owned to privately owned PRASA, things have become detrimental,” the photographer notes. With “Journey With Me,” the artist offered fellow commuters, an opportunity to speak on the fragile state of the train system by sharing what they enjoy about taking the train as well as what they dislike, or even hate, about it.

“Using my art as a tool,” he says. “[I wanted] to give voices to the people who the media doesn’t bother to. I photographed 25 images which commemorate the 25 years of democracy and my 25 years in this world.” His work offers a window into a central part of everyday life for many South Africans that, and urges viewers to immerse themselves in both the good and more challenging parts of each respective journey from a visual perspective. “These are their stories, some brief, some in depth. Come and journey with us.”

See a selection of the Witovet’s “Journey With Me” series below. Some responses were given in IsiXhosa and translated into English by the artist, who adds that “slang” names for the train in IsiXhosa include: gayido, impantshwa, uloliwe, umbombela, and istimela. You can check out more of Witvoet’s work via his Instagram and Vimeo pages. 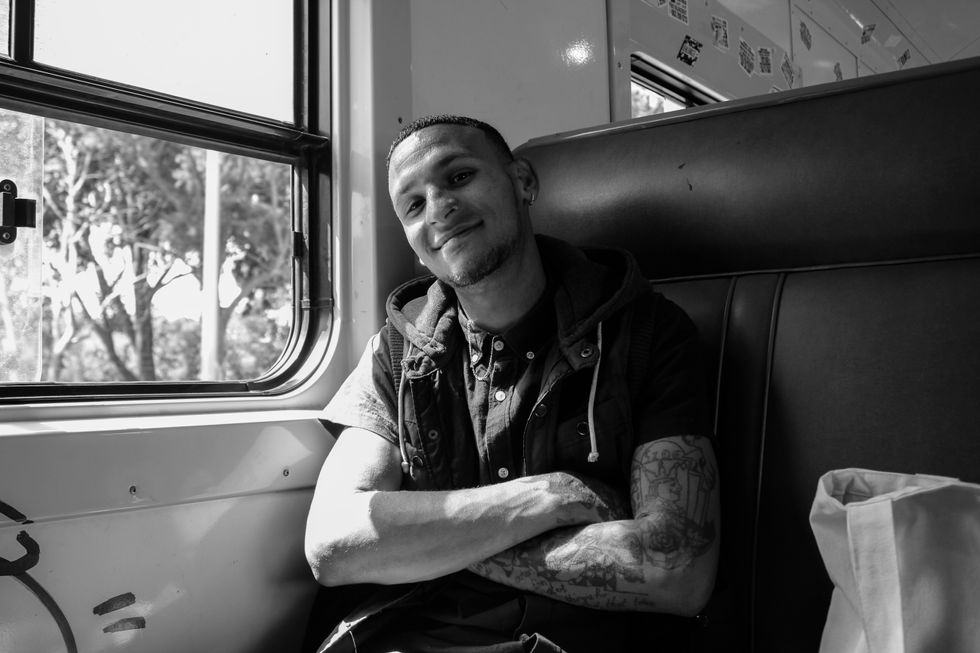 I travel by train a lot because when I go to work, I take a train from Elsies River to Stikland. I will say that it’s an enjoyable ride, because early in the morning there aren’t a lot of people. When there is a lot of people, there’s not actually a dull moment because there’s a lot of funny people who sometimes you watch and laugh about. There are a lot of characters on there. Some people like to dance also and just make their own performances for everyone. It gets you where you wanna be, you understand? Maybe not the quickest like a taxi, but the taxis isn’t the best ride because maybe they’re gonna start shooting at each other. Me and my wife are taking this ride because I know how it feels—just watching the places [as you pass by]. It’s just easy—you hear the sounds of the train, the silence. It’s something new for her to see what it’s like riding a train.

What I don’t like about the train though is it stops sometimes and you have to wait very long. It may stop when you need to come by a place very urgently. But there’s not actually a lot I don’t like about it. For me the train is nice, I enjoy it. When I come on, I just sit and relax until I arrive at my station. 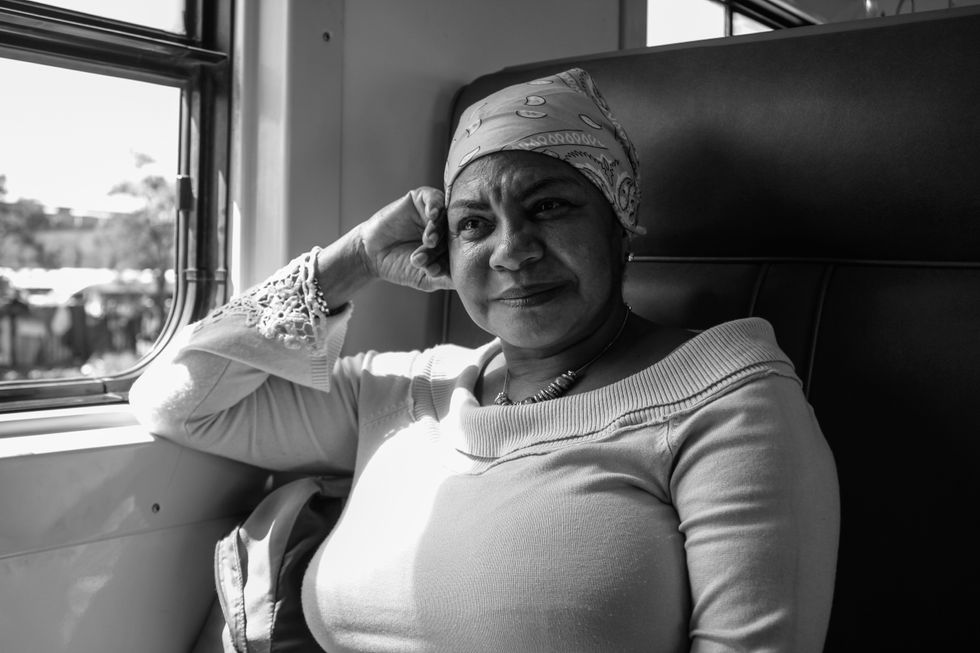 For me as someone using Metrorail/PRASA, it’s affordable. It can take you from point a-z, and is affordable still. I believe if they can only just see and help [make sure] that the train is running per schedule, then everything will be fine. I’m happy with that they always deliver, they try their best, but what they can also do for us as commuters, is once in a while, they can offer some security in between the trains. That would be much appreciated. 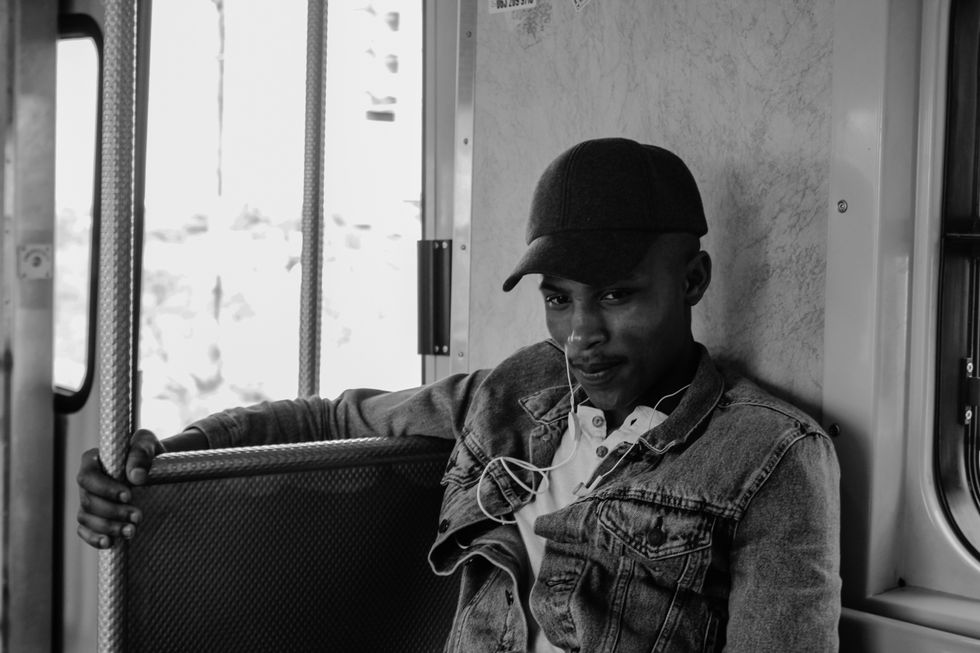 Translation: I like the fact that the train is fast. Most of the time, when it is functioning efficiently, it travels fast. It is the one transport that I consider using when I’m travelling from Kuilsriver to Cape Town because it can transport me within a short amount of time. The other thing I like about the train is the fact that it’s cheap, although it might not be the safest.

What I don’t like is that PRASA does not know how to manage the train. You will find that you get into the train and it’s already overloaded. For instance, PRASA could try to calculate how many people are supposed to be within a train at a given time. That way they’ll know whether to organize two trains that are traveling to Cape Town at the same time. Another thing I don’t like is the fact that the trains are no longer safe. There is not even a single security [guard] inside each carriage. Instead, they make security spend the whole day guarding the train station—but we are dying inside the train carriages. They could improve on by introducing security inside the train carriages as well. There is a huge gap that needs to be filled. 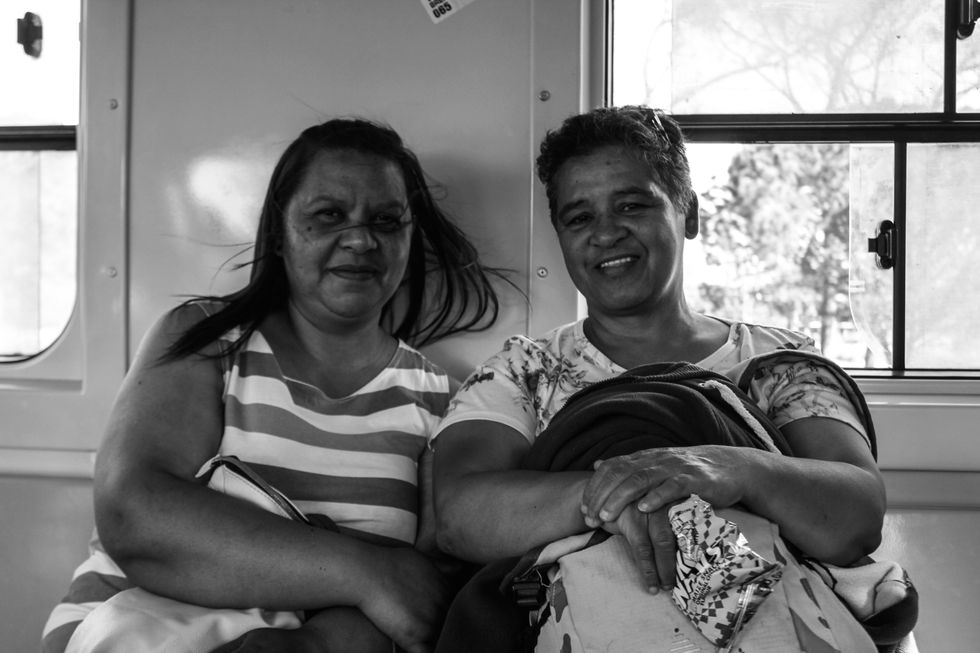 Oh I hate the delays—and basically that’s it. It’s very cheap and convenient, but the delays mean that I get to work, say, two hours after I take the train. I leave home at five, and sometimes I don’t get to work until past eight. In the evenings I get the train and I travel from Elsies River to Retreat, which should take me about an hour, but sometimes it takes me up to three hours just to get there. The difficult part is, I’ve got to change trains at Maitland. What happens is that either of the trains—the northern line or the Cape Flats line—one of the two is delayed on any given date or day. It’s very inconvenient and sometimes the only way I can cope is to either swear or get frustrated—at the end it is not good for my health. But, what I love is that I make lots of friends, that’s the part I enjoy the most. 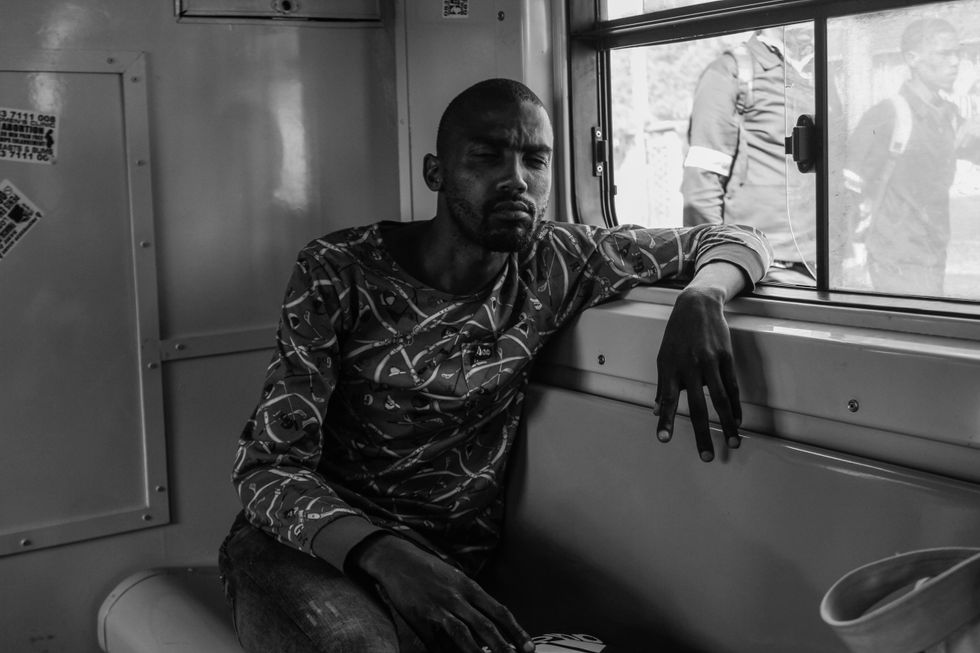 Translation: I do not want to lie, I do not pay for train. I do not buy a ticket. I travel freely, which is what I like the most about the train. Also the fact that it is cheap if ever I do need to purchase a ticket. [What I dislike is] that sometimes they travel terribly. Sometimes, you’ll be waiting and you’ll hear that the train you’ve long been waiting for is no longer arriving. You leave your home at 8AM only to arrive at work at 1PM. And the crime—people get robbed in the trains. There are too many delinquents and criminals and there is no security. That’s what I don’t like about it. Otherwise everything else is alright. 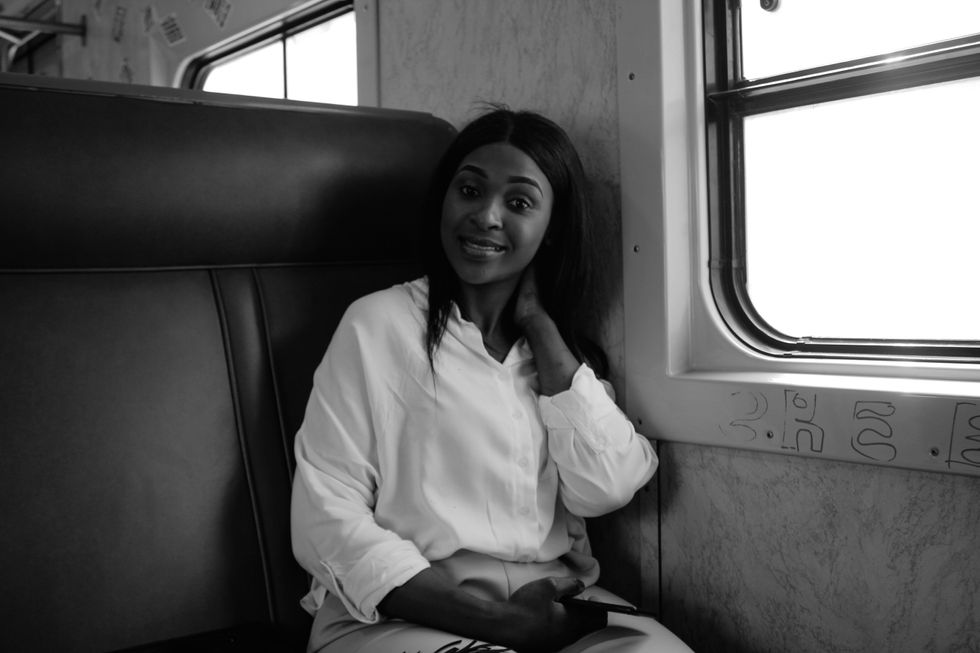 Translation: I do not take the train because I like to, or because I enjoy traveling with it. It’s just that it’s the most affordable transport—especially for me, since I study far away. The taxis are expensive and I can’t afford them. The thing I do not like about the train is the fact it is not always safe, although it is the most affordable transport. Anything can happen at any given time. If it could be safer, I would actually like it. 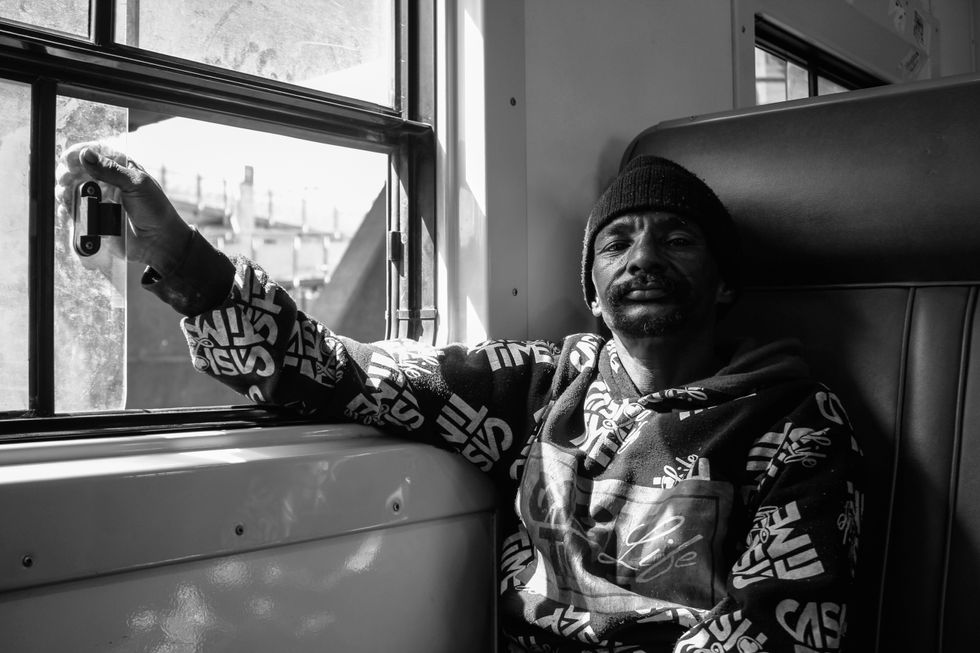 I enjoy taking the train in the morning at five or twenty to six. I like taking it to Cape Town. If I come back, maybe at eleven or twelve in the morning, I take the train to Netreg—nowhere else. When the train is late then you must struggle going to work and all that stuff—that’s what I don’t like. 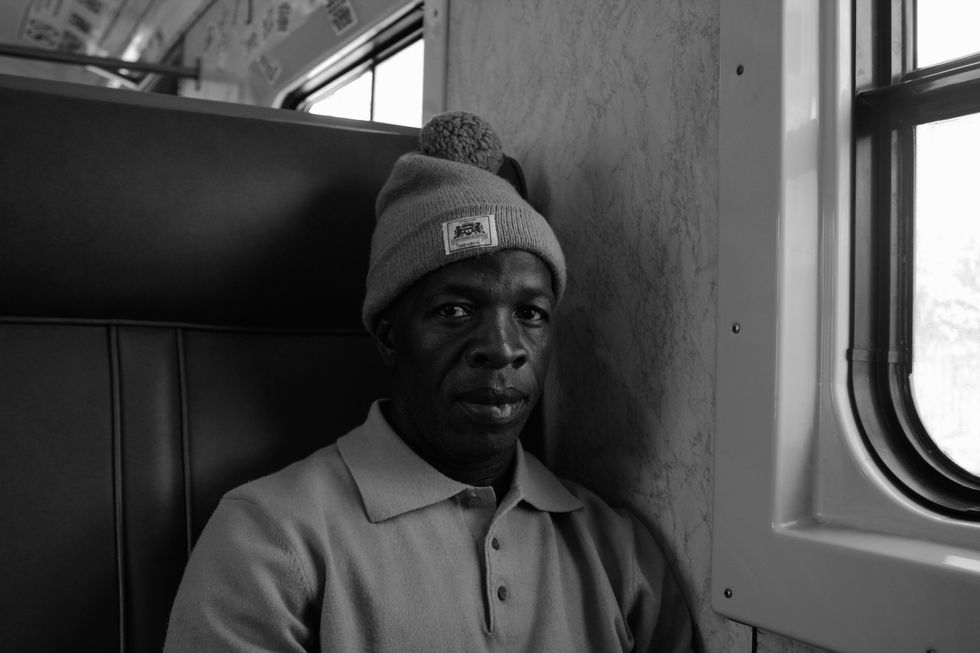 Translation: The train is the most affordable, particularly because I am currently unemployed and I do not have the means to afford traveling with a taxi for instance. [Right now] it is not safe to travel with the train, because there are too many robberies happening. We are risking our lives sometimes by traveling on the train, but since we cannot afford to travel with other modes of transportation, the train is at least better. 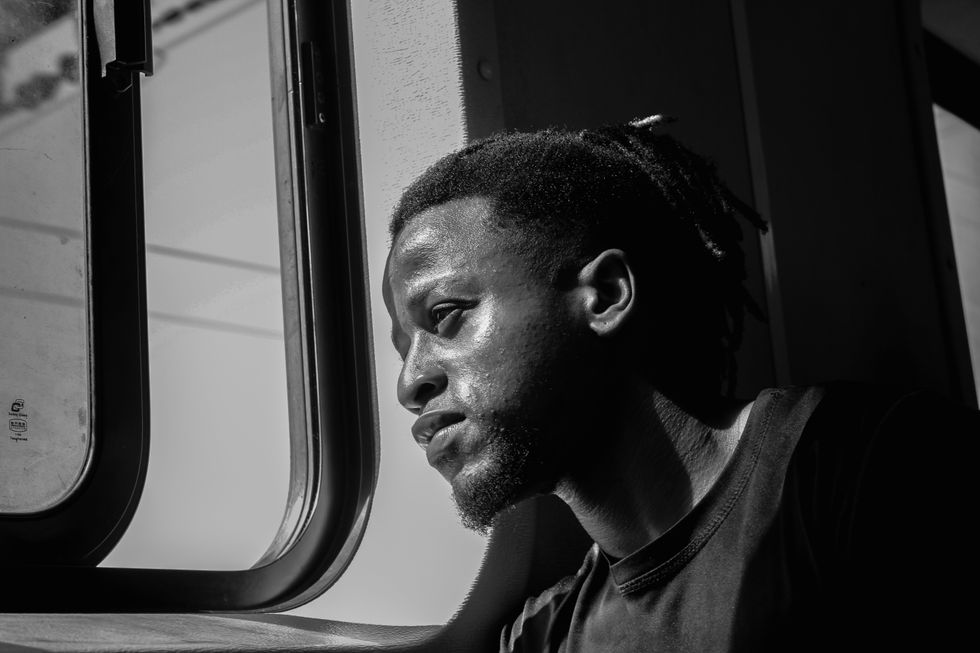 There’s not really much to like, it’s unfortunately—I wouldn’t say that it’s convenient—but it’s the cheapest form of transport. It’s not as safe as it used to be, but it’s still the cheapest. If I had any other way, I would definitely choose another alternative. There’s a lot to mention, but just the sudden inconveniences whereby you might think you’re early one moment and then you’re stuck between stations for hours on end.

But, before I forget, one thing I do like about the trains is the different individuals that you meet. I like the different cultures of people and the vendors. You never know what you might, or who you might encounter on the trains. It’s really nice to see different people. That’s what I like about it. 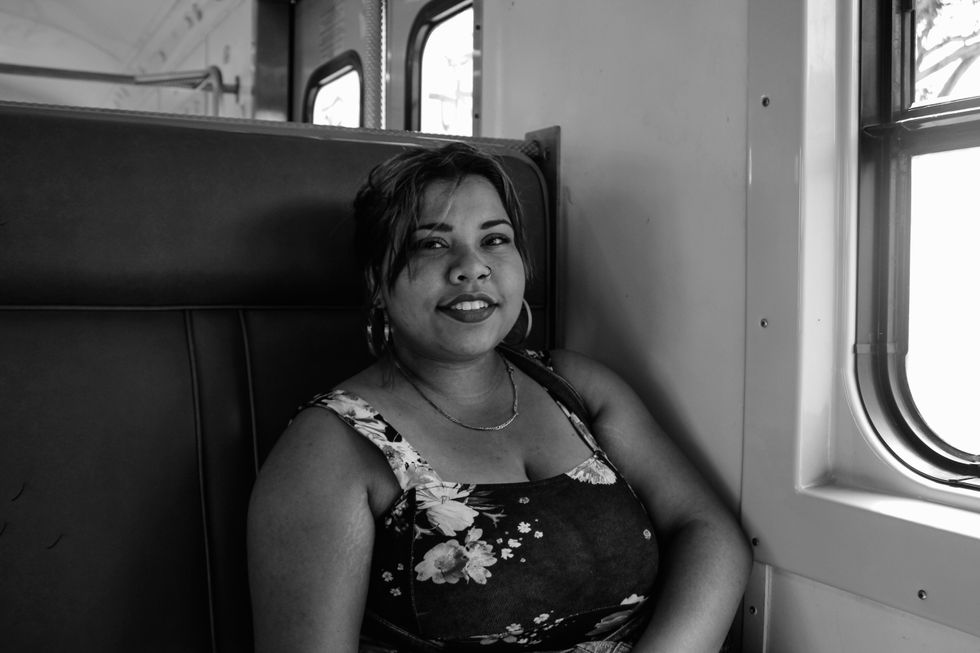 In my case, the reason why I like taking the train today is because it’s an adventure. You get to see all the different places. That’s why I like the most about taking the train. [What I don’t like] is that it’s not the safest because of the crime. If they could have a better security procedure [it would help]. 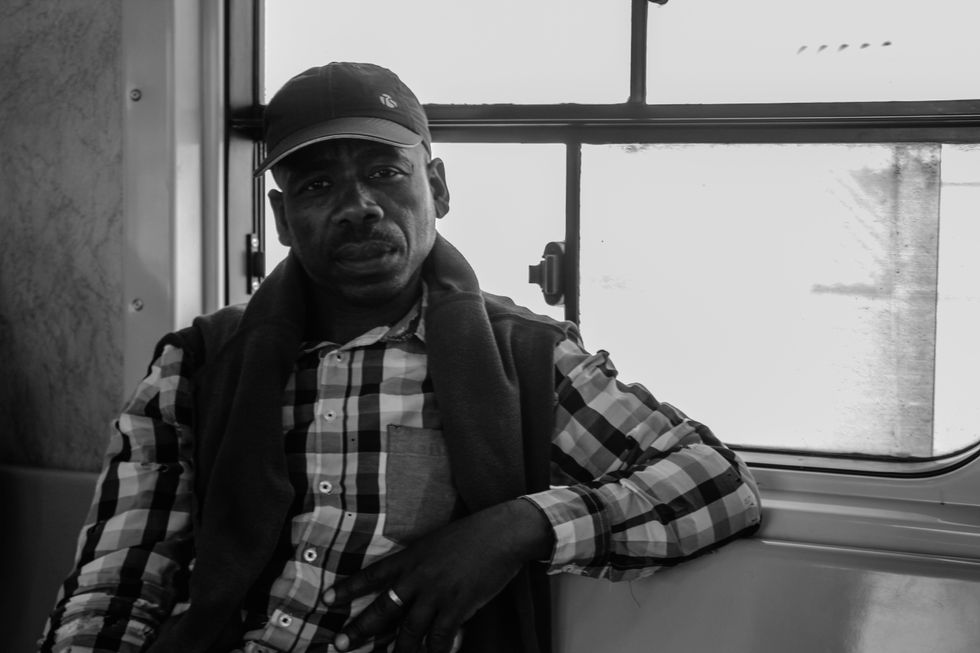 Translation: For a fact, I like it because it is cheap and affordable. but lately I do not like the way they have been functioning.