Egungun: the dead among the living. Danofojura: the masquerade that baths in fire

by Femi Oshin
in Culture, News

Share on FacebookShare on Twitter
The trains of thoughts that comes when you see an Egungun is to either run as fast as your leg can carry you, scream and pass out or just hold your ground and become crippled temporarily with fear while the Egungun passes.
So, what is the evolution of Egungun in Yorùbá culture? How did they come into existence? Who are they and how have they been able to maintain and create a fearful disposition over the years.
Historians and culture experts have argued over the years on the Nupe influence on Yoruba culture, especially with the introduction of Egungun in Yorùbá land. True, there was the Nupe influence, but we should acknowledge that the Yorùbá culture had its traditional take off with the Egungun culture.
It is important to note that the functional objective of the Egungun in Yorùbá culture is divided into the different parts; ancestral protection, theatrical performance, some were summoned before any Military expeditions in pre-colonial times, as a way of checkmating the excesses of the Oba, and promoting family or societal cultural aesthetic and lastly as a medium of cultural preservation.

The colourful exhibit and fancy dresses outlay of any Egungun in Yorùbá land was borne out of its core genesis and cultural flamboyancy that best describes the beauty of culture, tradition and heritage.

It’s bold and fearful outlook creates a persona of “god/ancestors like image on earth.”

However, no matter how comical and fun looking any Egungun is, one needs to understand the powerful spiritual, cultural relevance and strength they possess, thus making them supernatural beings in their own right. In Yorùbá land, this state of spiritual relevance earns them the appellation “Ara Orun kin kin” meaning: “Members of the celestial order.”

The physical performance of any Egungun is propelled by the spirits of the ancestors of that particular Egungun. Thus making the performer and the “Eku” (the costumes of the Egungun) one.

Not just mere mortals at the moment of the display, they represent spirits of the dead, ancestors and gatekeepers that guard the gates of Olodumare. In movement and appearance, the masquerade depicts the presence and power (aṣẹ) of the ancestors. 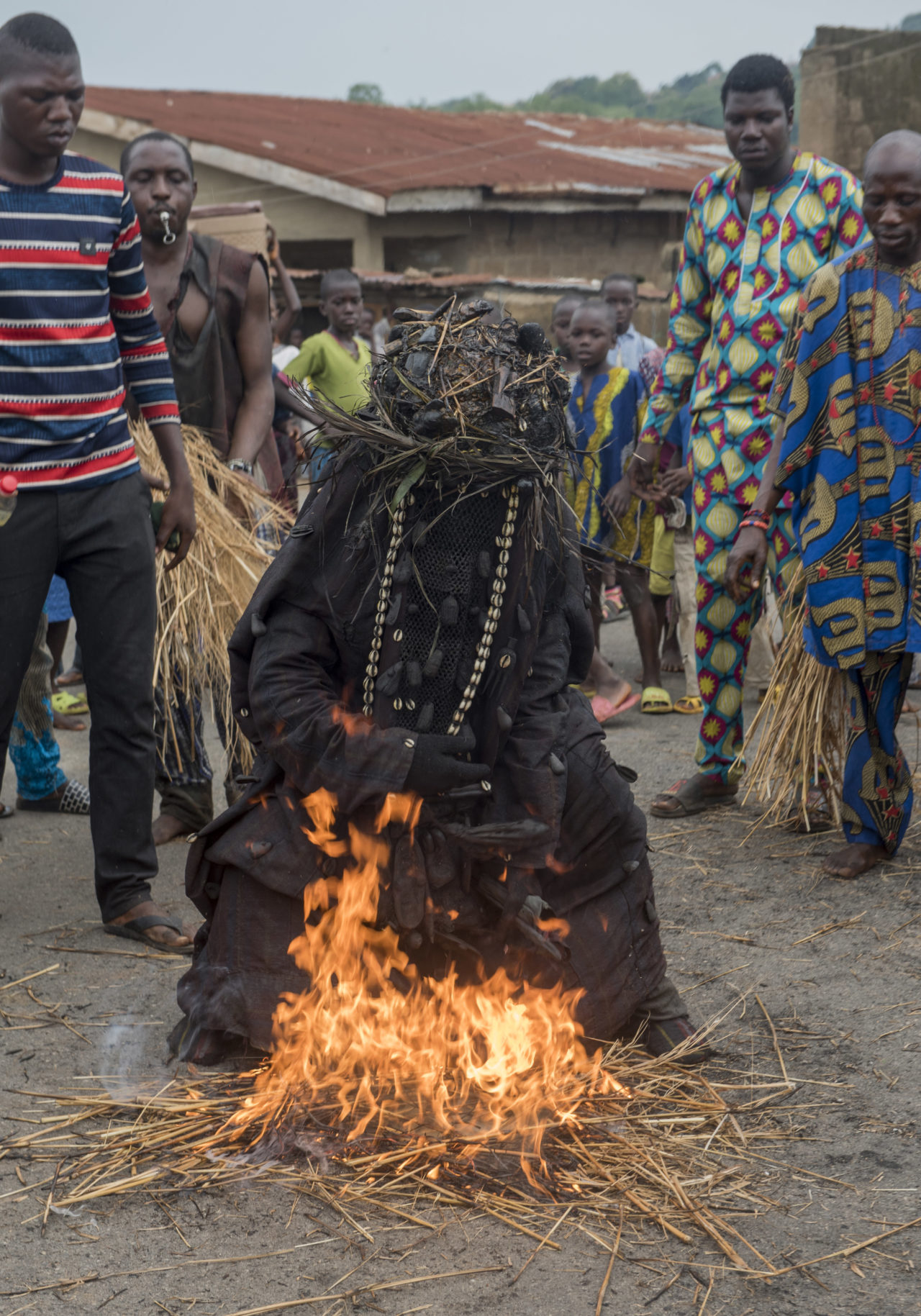 According to Yorùbá oral tradition, Eesa Ogbin Ologbojo, the eponymous ancestor of Yorùbá carvers was the first masked performer in the court of the Alaafin of Oyo. The first costume consisted of several layers of sash, or ooja, borrowed or appropriated from women- hence the tradition of intricate assemblages of colorful fabrics by any Egungun.

The Alapini seats as the head in the hierarchy of the Egungun fold. Performers are always male members of the Egungun cult. Slaves, the uninitiated and ill-mannered people are forbidden. Women do not dance around or in front the Egungun, but their chant and songs are essential to the melodramatic success of the festival.

Different Egungun in Yorùbá land perform different duties, and their function varies from the origin of their cult to the other. There is technically an Egungun for every age grade, association, worship of deities, artisan association, and cultural professionals in Yorùbá land.

Egungun such as the “Gelede”, which is a flamboyant and fashionable masquerade, celebrates the very core of African womanhood, advocates for female gender equality and protects the rights of the women, although men commonly wear the headdress.

On September 2, 1853, the death of Oba Akitoye of Lagos ushered in the very first performance of the famous “Eyo Festival”, at the time, it was called the “Adamu Orisha Play” a theatrical performance as funeral rites for every Oba of Lagos and any important person in the State. 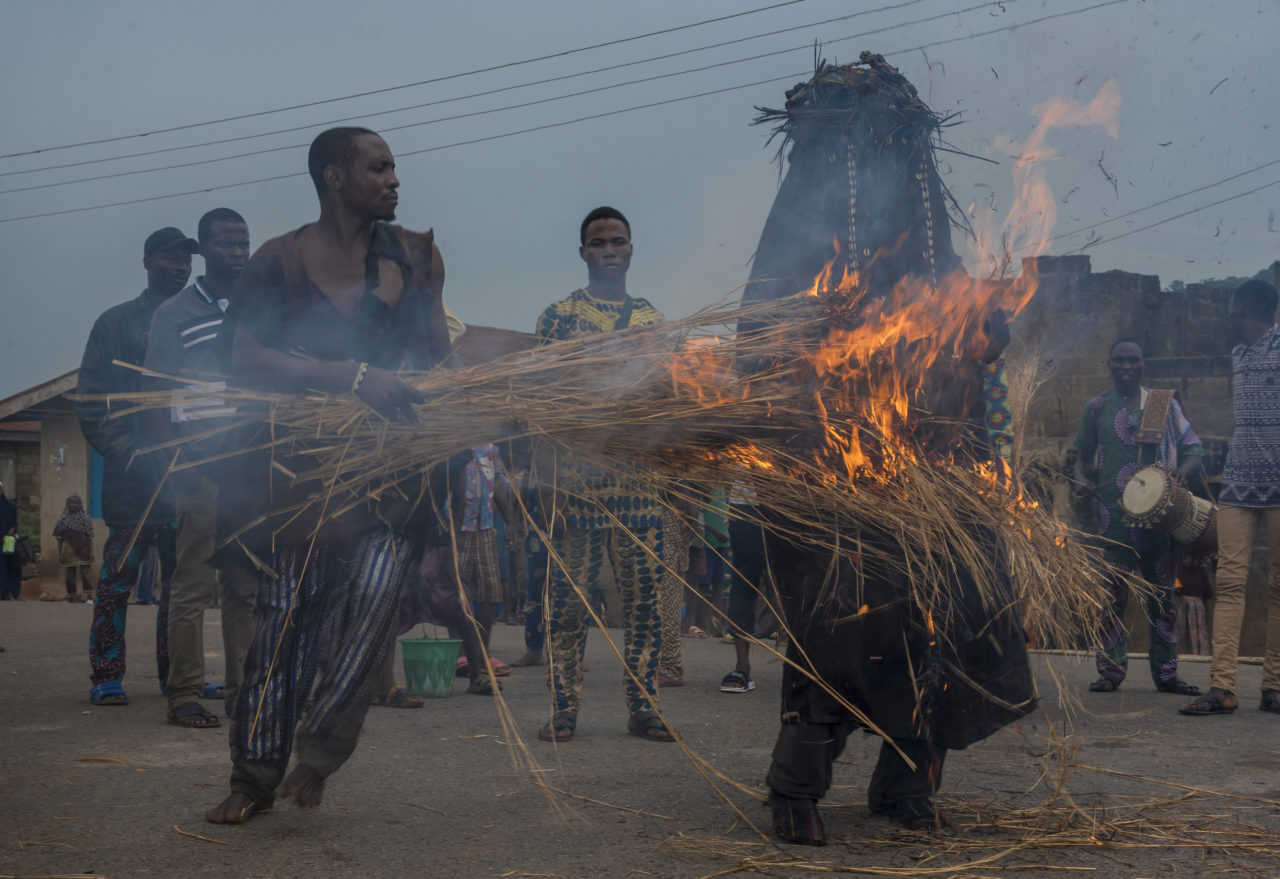 There is the Alapansanpa Egun, used in the past to fight and won many wars in and outside Ibadan.

This masquerade is renowned and his importance to Ibadan cannot be overemphasised. He comes out once a year (in June), and must go to the Olubadan’s palace where he whips the Olubadan with his whip three times after which the Monarch blesses him with gifts and other items. If he does not go to the Olubadan’s Palace, prosperity and peace will cease in the land, meaning the Olubadan is a bad person.

There is also the famous Danafojura (Egungun Oni Mojesin Baba Ibeji) from Oyo Kingdom. This Egungun is fire-resistant –No matter the size of the fire, He cannot be consumed. He has the power to make people unconscious and revive them. He is an ancient and powerful Egun highly feared and respected among his peers, where he is considered as an “ELDER” in the clan. He displays his dance inside a blaze of a huge fire burning. His name “Danafojura” which means, “Set me on fire” is what he says to his handlers the moment he sets out of his coven.

Some Egungun come out at certain times and season of the year, making it festive periods, some at will, and some unannounced – a sign of danger coming into that community or region might trigger this.

Just like the colorful hundreds of fabrics that form the basis of the Egungun costume all glued to the body of the Egun, the significance of the Egungun in Yorùbá cultural set up is to uphold the cultural reliance and tradition of the land using culture an anchor for a progressive future.

Tags: egungunEgungun: the dead among the living. Danofojura: the masquerade that baths in firemasquerade
Previous Post