Controversial poet Ntsiki Mazwai tweeted some homophobic vitriol against the LGBTQI+ community and it seems the attack comes unprovoked.

In her latest rant, Ntsiki has accused gay men of having what she calls “vagina envy.”

This came after she shared her theory that Somizi Mhlongo the renowned choreographer-turned-reality star, set up his Comedy Central Roast, featuring her on the panel, as a way to “kill her brand.” 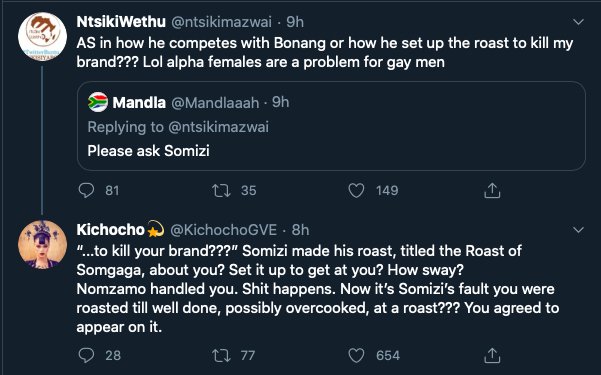 Ntsiki decided to lash out at a social media user who uploaded pictures of himself a year ago and had a caption that simply read “felt cute”.

AINT is always the gay boys trying to drag me?🙄I should have known this is just vagina envy 😘 https://t.co/gv7ttqLOmQ

She went on to ask why gay men had a ‘deep hatred for the alpha female.

It’s like gay men have a deep hatred for the alpha female……brothers what’s up????

In a now-deleted tweet, a user replied to Mazwai and mentioned “Idols SA” judge Somizi Mhlongo-Motaung.

Ntsiki responded that he set up his roast to kill her brand.

AS in how he competes with Bonang or how he set up the roast to kill my brand??? Lol alpha females are a problem for gay men https://t.co/hMpffV0iLa

Many Twitter users did not find any of her tweets amusing but proceeded to drag her.

Lol. I want to know where you’re getting this, because as far as I know, gay men worship powerful and successful women.
A lot of gay men love Bonang, we worship Beyonce, we are die hard fans of Ariana, to name a few.

Where are you getting this speculation?

Cropped out family member what’s up?

But my darling, you are out here daily talking garbage about everyone else. How come you have never considered that “deep hatred’ and brand assassination.

Can’t believe you caught so much feelings all over a roast. You’ve really kept shit in your heart all this time thina sicabanga ukuthi bekudlalwa kuRoast kanti nilinde opportunity to oppose everything that happened kuRoast outside the roast, mknr

“Schools Are Not Ready To Reopen In June”: Mmusi Maimane And SADTU Disagrees With The Basic Education Minister